THE VENITIAN COUNTRY SIDE TOUR 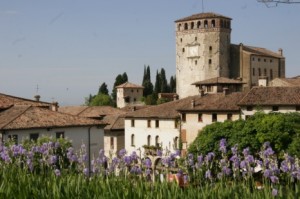 THE HIDDEN TREASURES OF THE VENITIAN COUNTRY SIDE

Often overlooked by the casual traveler, Italy’s “other” famous hill towns offer unique treasures all their own. Little faschinating tows full of history at the foothills of the Dolomites

ITINERARY
– Marostica, little medieval town whose medival fortifications are almost intact. All along the lenght of the walls are towers placed at regular intervals, Marostica is not a big town and it is centered around a large square called Piazza Castello, famous for the chess board painted on its pavement. According to the legend, in 1454, Rinaldo da Angarano and Vieri da Vallonara played an important live game of chess in Marostica on a huge chessboard, specially painted in Piazza Castello, to win the hand of Lionora, the daughter of the lord of the castle, Taddeo Parisio.
Since 1954 this challenge has been re-enacted every two years and has turned into a real town festival, with traditional 15th century costumes.
– Bassano del Grappa, crossed by the river Brent, is one of the most densely-populated and well-developed town in Veneto. As well as fast-growing industrial economy and a lively cultural activity, Bassano has a fine gastronomic tradition. Its tipical products are the asparagues and grappa.
All the town is full of buildings of fine taste, enriched with prescious ornamentation.
In the central Monte Vecchio square are the impressive Palazzo del monte di pieta’ and the Casa Dal Corno Bonato, the facade of which was frescoed by Jacopo da Ponte, known as il Bassano ; a few steps away, in Piazza della Liberta’, is the neoclassical church of San Giovanni built in the 1300s by the architect Giovanni Miazzi. The 15th century Loggia del Comune is also lovely. The pearl of Bassano is, however, its wooden bridge, designed by Palladio in this material as its flexibility would resist the raging Brenta river. It was damaged both by the river and by bombings, but it was always restored following the ideas of Palladio. The last restoration was in the second postwar period and it was due to the Alpine troops.
– Asolo, old walled hill town known as the town of ‘One Hundred Horizons’, Asolo is one of the most enchanting spots in Italy and the jewel of the Veneto region. Its great location and wonderful climate made Asolo a population centre right from prehistoric times and later a principal settlement for the Veneto people.It has been the beloved retreat for the poet Robert Browning and explorer Freya Stark.
– Villa Barbaro, completed in 1565, also known as the Villa di Maser, designed and built by Andrea Palladio, with frescos by Paolo Veronese and sculptures by Alessandro Vittoria for Danile Barbaro, Patriarch of Aquileia and ambassador to Queen Elizabeth I of England. The villa was added to the list of World Heritage Sites by UNESCO in 1996.
– Prosecco wine tasting in a local winery

-THE VENITIAN COUNTRY SIDE TOUR

-THE ARTISTIC TOUR OF TREVISO ASOLO AND POSSAGNO

-THE RED WINE TOUR IN ODERZO AND THE PIAVE RIVER

-TOUR OF THE CASTLES AND WINES IN TREVISO AND CONEGLIANO

-TOUR OF THE DOLOMITES

Venice Car Service - Limo Service in Venice-Treviso-Rome-Naples.
We use our own cookies and from others to improve our servicies. If you keep on navigating we consider you accept their use.OkLearn More